Why should Endosulfan be banned?


There has been a lot of concern in the last few decades regarding organic chemicals that do not degrade, but persist and accumulate in the environment. These Persistent Organic Pollutants (POPs) are mostly organochlorine pesticides, but also include others like polychlorinated Biphenyls and Dioxins. The worry is that the accumulation would adversely affect marine and other life. There is plenty of evidence regarding this. 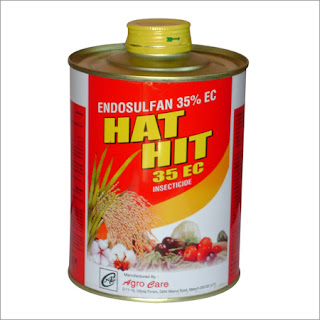 It was initially thought that Endosulfan - an organochlorine pesticide - degrades in the environment. In fact, the website of Excel Cropcare Ltd - the biggest producer of Endosulfan in the world - proclaims that “it is safe to use on parasites and predators and does not leave persistent residues in the environment – soil, plants and water”. This is now scientifically known to be untrue. US Environmental Protection Agency (USEPA) says in its 2002 document “based on environmental fate, laboratory studies, terrestrial field dissipation studies, available models, monitoring studies, and published literature, it can be concluded that Endosulfan is a very persistent chemical which may stay in the environment for lengthy periods of time, particularly in acid media’’.
Endosulfan does fulfil several of the criteria under the UNEP Stockholm Convention for designation as a POP. The alpha- and beta-isomer have similar physical-chemical properties and environmental behaviour to some of the obsolete organochlorine pesticides, although an assessment of their persistence and toxicity should be viewed alongside Endosulfan Sulfate, as ‘Sigmaendosulfan’. Persistence of ‘Sigmaendosulfan’, coupled with the continued use of endosulfan pesticides, will ensure continued long-range transport and contamination of remote environments like the Arctic. (Weber et al., “Endosulfan, A Global Pesticide: A Review of its Fate in the Environment and Occurrence in the Arctic”, Sci Total Environ. 2010 Jul 1;408(15):2966-84.) 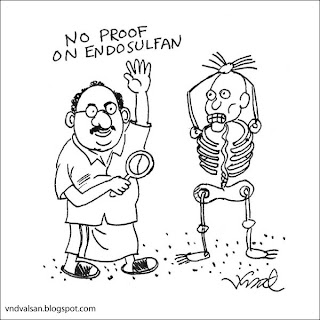 There are many studies of organochlorine insecticides, including Endosulfan, acting as Endocrine disruptors. This means that these chemicals affect hormone levels including the reproductive hormones. Infertility, abortion, aberrant secondary sexual characteristics during adolescence and so on could result as surmised from extrapolations of animal studies. Obesity and Type 2 diabetes are some of the other problems shown in experimental animals exposed to prolonged low doses of these chemicals. The link between POPs and these diseases in human populations are coming to light now (Lee et al., “Low Dose Organochlorine Pesticides and Polychlorinated Biphenyls Predict Obesity, Dyslipidemia, and Insulin Resistance among People Free of Diabetes”, PLoS One. 2011;6(1):e15977). Studies have shown correlation between exposure to hormone disruptors during foetal development resulting in incomplete and deformed reproductive systems, reduced fertility and compromised immune systems in wildlife and impaired mental development, learning difficulties, hyperactivity and clear cell vaginal cancer in humans.
Endosulfan was sprayed through the aerial route on a heavily populated region in Kasargode, in effect contaminating their drinking water and food. This went on for two decades. Here was virtually an experiment, only difference was that it was being done on a human population. So, would the predictions hold true? What is the scientific evidence of the ill effects of hormone disruption?

There have been three epidemiological studies done in the area. A small pilot study done by KSSP in 2001 in 153 households in the epicentre of Enmakaje panchayat compared to 441 households in the relatively less affected areas. This was followed by a well designed study conducted by the National Institute of Occupational Health (NIOH) an ICMR research institute in 2002-3 (Saiyed et al., “Effect of Endosulfan on Male Reproductive Development”, Environ Health Perspect., 2003 Dec;111(16):1958-62). Recently there has been another study done by the Community Medicine Department of the Calicut Medical College. All the three studies have reached near identical conclusions pointing to the effects of severe hormone disruption in this population.
There has been no scientific refutation of these studies. There was a ham handed attempt by a committee headed by O.P. Dubey to discredit the NIOH report. However, as I have pointed out earlier, this committee does not know even elementary statistics. Now, the Gujarat government has come forward with another committee report trying to trash the NIOH (incidentally located in Gujarat) study. This is mere rehash of the Dubey report and is prompted by the need to protect the pesticide companies and is a plain hatchet job. The scientifically inclined reader can judge this trash which is available at http://www.gujhealth.gov.in/Portal/News/59_1_endosulfan-report.pdf.
Forgetting Dubey and Gujarat government and coming back to serious science, is the Kasargode experience a one-off affair due to very faulty application of science? Definitely, such things can happen again with some other pesticide being sprayed on people's heads incessantly. But remember that in case of persistent pollutants, their levels may build up in the environment and once it has been shown to be an endocrine disruptor in humans, there is no other way out than withdrawing it from the market. This is not all. Now reports are appearing that even without aerial spraying, human exposure to endocrine-disrupting chemicals can cause pre-natal risk factors for undescended testes and hypospadias. A nested case control study from Spain shows exactly this. (Fernandez et al., “Human exposure to endocrine-disrupting chemicals and prenatal risk factors for cryptorchidism and hypospadias: a nested case-control study”, Environ Health Perspect. 2007;115 Suppl 1:8-14).
I have written this long note to clarify on whose side good science is. On the one hand, you have an array of peer-reviewed literature and a cogent argument combining basic science, epidemiology, biological plausibility, and warning of risk and need for caution. What do you have on the other? Dubious Dubeys and Modi-appointed spokespersons for the pesticide lobby? What scientific literature is there in their hands that would persuade us to throw caution to the winds?
So this is not a fight between motivated politicians and screaming environmentalists versus scientists and rational arguers. This is between good science versus lies and propaganda dished out by an industry out to make the last few bucks from a doomed chemical.
Posted by R. Ramakumar at 2:34 PM 6 comments:

Some of you might have seen the new working paper authored by Kaushik Basu, the Chief Economic Advisor of the Ministry of Finance on corruption.
Read it here: http://finmin.nic.in/WorkingPaper/Act_Giving_Bribe_Legal.pdf
The major argument in the working paper is that "we should declare the act of giving a bribe in all such cases as legitimate activity. In other words the giver of a harassment bribe should have full immunity from any punitive action by the state...It is argued that this will cause a sharp decline in the incidence of bribery."
Now, in today's The Hindu, P. Sainath has sharply come down on this paper.
Read it here: http://www.thehindu.com/opinion/columns/sainath/article1712689.ece
All this reminded me of a famous case in the early-1990s. The case of Harvard economists, Andrei Schleifer and Robert Vishny. They have written the basic neo-classical piece on corruption, titled just "Corruption", published in The Quarterly Journal of Economics (August 1993). This famous Vishny-Schleifer paper has a very important conclusion, which is just the same as Basu's:

"the illegality of corruption and the need for secrecy make it much more distortionary and costly than its sister activity, taxation. These results may explain why, in some less developed countries, corruption is so high and so costly for development"

Now, this paper had an inspiration. That was Schleifer's own work in post-1991 USSR. Schleifer, a Russian born emigrant economist, was recruited specially by Jeffrey Sachs from Harvard to navigate the privatisation process in the Soviet Union in 1991-92. Schleifer, just 35 then, was called as the leader of the "Harvard Mafia" that led the privatisation programme in USSR. With Jonathan Hay (a Harvard Law graduate). Schleifer was selected specially because he knew Russian. Then comes the paper of 1993.
Alas! What happened to Schleifer after that is interesting. With privatisation of assets, corruption in Russia went up like mountains over mountains. Schleifer had a wife, Nancy Zimmerman, who was a hedge-fund manager. She travelled with him to Russia. These two are supposed to have indulged in one of the most serious "insider-trading" corruption charges in post-1991 Russia. The US government had a contract with Harvard, which drove the US-directed reform process in Russia. One element in this contract was that no member would invest in anything financial in Russia. Schleifer, the team leader, was the first to violate this contract. For instance:

"In 1994, Shleifer and Zimmerman, with the help and advice of Leonard Blavatnik, a New York-based Russian emigrant and a member of the Forbes 400, placed $200,000 in a Blavatnik vehicle called Renova-Invest, which invested in a group of Russian corporations that were being privatized under Shleifer's guidance" (http://janinewedel.info/harvardinvestigative_InstInvestorMag.pdf).

"However, later in 2004 the government announced that Zimmerman's firm had agreed to pay $1.5 million in a settlement. A year later Harvard agreed to pay the largest amount in its history to settle a lawsuit -- $26.5 million. Shleifer agreed to pay $2 million, Hay between $1 million and $2 million" (http://janinewedel.info/harvardinvestigative_InstInvestorMag.pdf).


So much, for a famous "theoretical" paper on corruption and its "application"!
Amen...
Posted by R. Ramakumar at 11:18 PM No comments:

Relaxing, post-elections...
Thus, in the midst of all the politician-bashing a la Anna Hazare, I went and re-read this lovely essay, by A. G. Noorani. He wrote this in the wake of a similar anti-politician wave after 26/11. He says:

"Neither politics nor the politician deserves sweeping censure. That is an abdication of public duty. That duty requires of all of us an unremitting, earnest, and serious interest in the affairs of the nation – whether by participating in the political process or by informed interest and if possible public comment. Delivering sound bites to ignorant anchors is sheer self-indulgence and a debasement of public discourse. That, alas, is very much part of the widespread phenomenon of dumbing down – itself a reflection of the decline of the public realm."

Email ThisBlogThis!Share to TwitterShare to FacebookShare to Pinterest
Labels: politics

Biases in the second Asianet-C Fore opinion polls in Kerala

View my complete profile
"When Adam delved and Eve span,
Who was then the gentleman?"